The map above shows current and going natural hazards and disasters across the world. Click on each icon for further information.

Introduction to the Natural Hazards and Disasters blog

Want to know what this blog is all about? Click on the video below to find out!


Posted by Saajeda Bandali at 9:33 pm No comments: 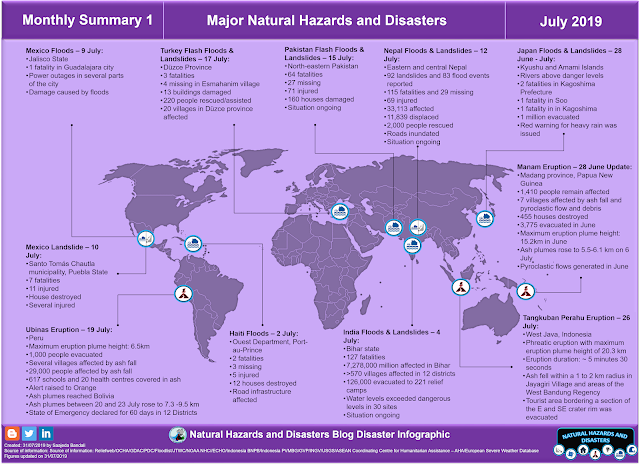 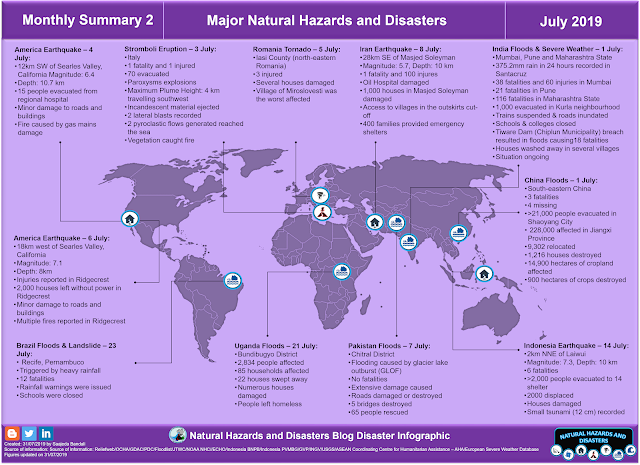 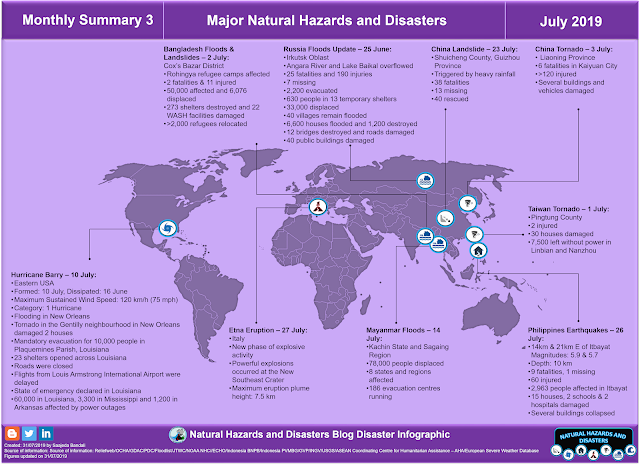 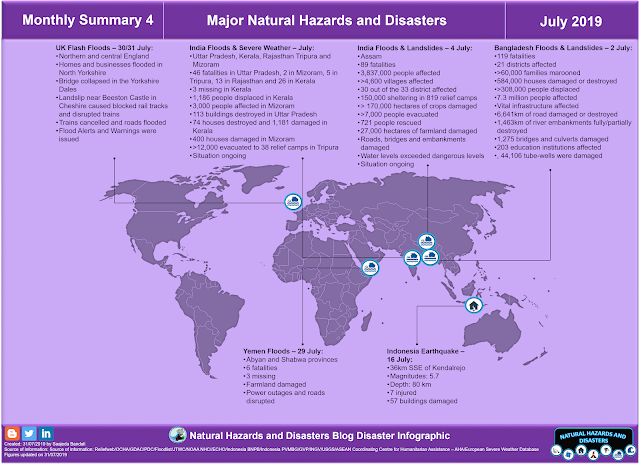 Posted by Saajeda Bandali at 3:57 pm No comments:

Nearly every rainy season (March to May and October to November), Dar es Salaam, the commercial capital of Tanzania, experiences flooding. This year is no exception, with torrential down pours in May, flooding has already begun resulting in widespread damage to homes, businesses, road infrastructure and vehicles.

According to the UNISDR Tanzania Disaster Risk Profile, floods affect an average 150,000 people (0.26% of the total population) in Tanzania. Floods are also responsible for an estimated average annual loss of $47 million (World Bank).


Recent studies and data has shown that the frequency and intensity of flooding in Dar es Salaam has increased due to intense rainfall as a result of climate change.


Both fluvial (river) and pluvial (surface water) flooding occurs in Dar es Salaam. The city has experienced a few significant flood events. Below are examples of recent significant events.


Dar es Salaam experienced the worst flooding in December 2011, a T100 year event. The event witnessed the heaviest rainfall since Tanzania’s independence in 1961.


The floods resulted in 41 fatalities, injured over 200 people, displaced 10,000 people and affected an estimated 50,000 people. 2,500 people were reported to be missing. According to the Tanzania Red Cross, 680 temporary shelters were constructed to house 3,400 of the displaced.


Widespread damage occurred throughout the city. The population living in the Msimbazi River basin were the worst affected. Homes were damaged, bridges destroyed and infrastructure including roads, were inundated causing disruption to the city’s transport.


3,400 people were relocated as a result of these floods. The flood cost over TZS 1.8 billion. 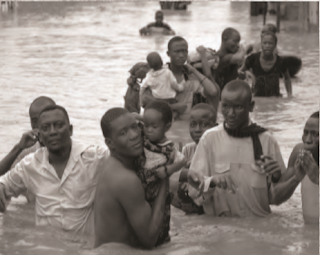 Impact of the 2011 Floods (Source: The Msimbazi Opportunity Volume A) 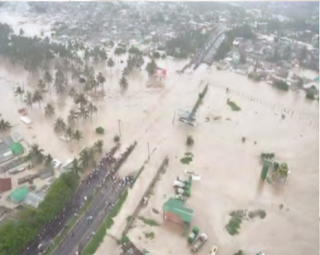 Flooding at the Kawawa Road Bridge in 2011 (Source: The Msimbazi Opportunity Volume A)


Floods in April 2014 caused 19 fatalities, affected an estimated 20,000 people, washed away 13 houses in the Mzimbazi River Basin and inundated 600 houses. 283 people were treated for waterborne diseases such as cholera.


During the floods in April 2018, the Dar es Salaam Regional Commissioner declared a state of emergency. Evacuation was ordered for the population living in the high risk areas.


The floods caused 15 fatalities, displaced 2,151 households, destroyed 42 houses and 21 latrines and severely damaged 342 houses according to the Tanzania Red Cross. Extensive damage was caused to road infrastructure and bridges. The city’s Bus Rapid Transit (BRT) system was also disrupted by the floods. 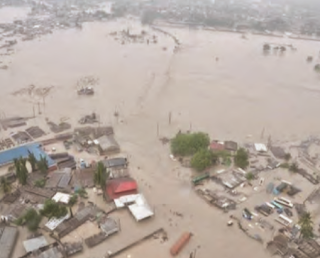 Jangwani Road flooded in 2016 (Source: The Msimbazi Opportunity Volume A) 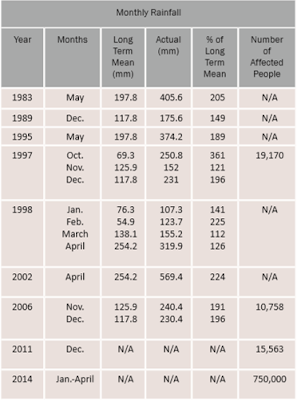 
An estimated 6 million people live in Dar es Salaam and this is expected to increase to over 10 million by 2030, making it a megacity. 75% to 80% of Dar es Salaam’s population are estimated to live in unplanned areas, some of which are vulnerable to high flood risk.
Four main rivers run through the city including; Misimbazi, Mpiji, Kizinga and Mzinga. Msimbazi is the largest river and Kizinga has the largest catchment.


Main areas at risk from flooding include the following:


With increasing population, rivers, in particular the Msimbazi River, have been degraded and polluted adding to the risk. The population of Dar es Salaam relay on these rivers for drinking, bathing and agriculture.


Storm drainage systems which only cover the city centre are limited or inadequate, with 50% in poor condition. They are also unable to cope with the increasing rates of runoff caused by urbanisation. This leaves them unable to cope with the runoff, leading to flash floods. Other issues such as poor maintenance, siltation and waste disposal add to the challenge.


Deforestation, land and soil degradation and rapid urbanisation, are some of the issues increasing flood risk. Increasing densification of the population and building on the flood plain is resulting in exposure and vulnerability to floods. Infrastructure barriers, such as low bridges, are also adding to the problem.


According to the Msimbazi Opportunity Plan (discussed below), the main challenges linked to flood events are: 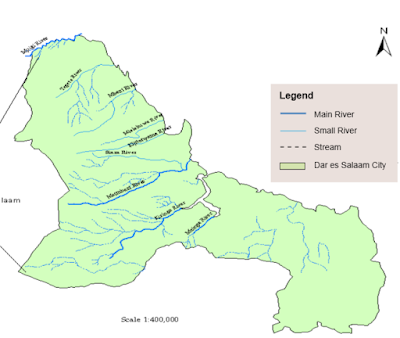 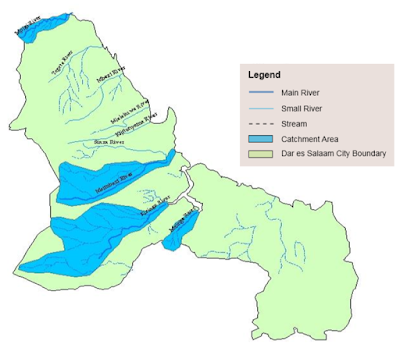 
Livelihoods, infrastructure and lives are at risk in this area, particularly in the Lower and Lower Middle Basin where the most severe flooding occurs after heavy rainfall. An estimated 8,000 to 10,000 households live in high risk areas which are unsuitable for human settlement.


Heavy rainfall results in flood depths of 2 metres or more in a matter of hours. It is not unusual to see peak discharge downstream within 3 hours, after rainfall. This short response time between rainfall event and flooding, gives those at risk little or no time to prepare and respond to the event.


Residents are becoming more resilient and have adapted to regular floods by taking measures such as raising foundations, retaining walls, protecting property by moving them to the roof, placing sandbags, unblocking drains or as a last resort; temporarily migrating during floods.


Extensive research and developments has been taking place in the Msimbazi Basin to understand and manage the flood risk. These include the development of digital elevation models (DEM) and numerical flood models, surveying using drones and satellites and urban mapping to capture buildings, infrastructure and assets using community mappers and data collectors.


Research on the impact of soil erosion and river sedimentation on the flood dynamics, have been carried out on River Msimbazi and other main rivers in the city. Two studies have also been carried out to explore and quantify the relationship between poverty and flood risk in Dar es Salaam.


You can find out more about these studies in the 2017 and 2018 Tanzania Urban Resilience Reports, linked in the reference section below. 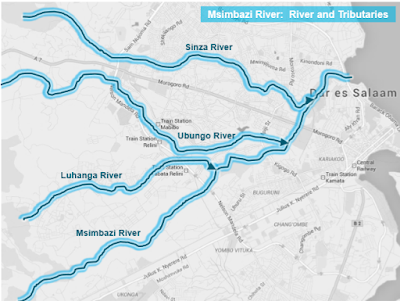 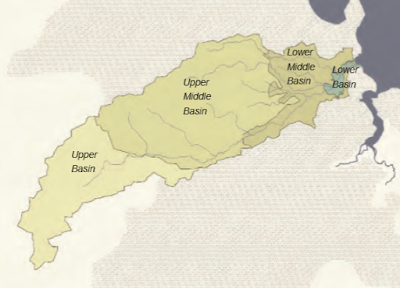 
Msimbazi Charrette: meetings and workshops have taken place involving stakeholders including government officials, the private sector and the general public. These were organised to coordinate efforts in gathering an understanding of the vulnerability and risk from the recurring flooding and manage the flood risk. Over 150 representatives and 59 institutions were involved in 8 stakeholder workshops and 49 meetings which took place in less than 9 months. 1000 local residents have also been involved in the process.


The outcome of these Charrettes is the Msimbazi Opportunity Plan (MOP). The Msimbazi Strategy and Management Framework and detailed plan aim to ‘transform the Msimbazi Basin into a beacon of urban resilience’. The plan not only provides input into flood risk management, but also environmental protection and urban development for the Msimbazi Basin.


Some of the proposed solutions in the plan include:

Stakeholders have designed four strategies listed below to meet these solutions:

In addition to these strategies, 10 strategy components and 48 interventions provide the framework to see the implementation process through. The timeline to fully implement to framework varies from short term (2019 to 2023), medium term (2024 to 2031) and long term (2050).


The Mzimbazi Framework and Plans will be used as a template and example for other cities in Tanzania which face flooding.


You can find links to the full and detailed reports and plans in the reference section. 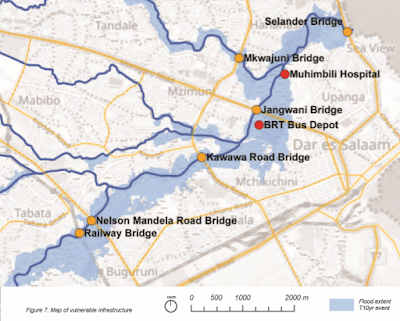 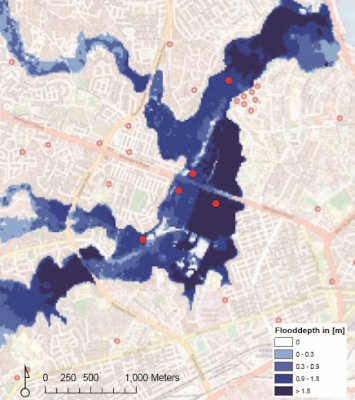 Example of a flood simulation model for Msimbazi. This map shows the flood depth at 60 hours of a T10 event (Source: The Msimbazi Opportunity Volume A) 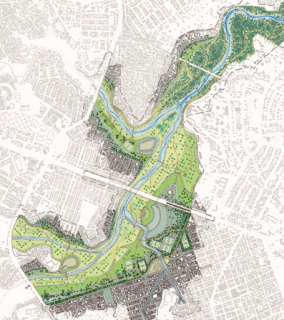 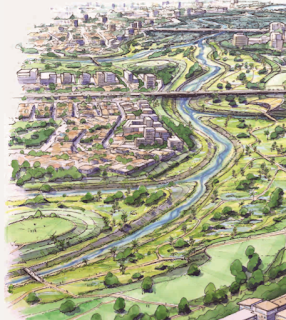 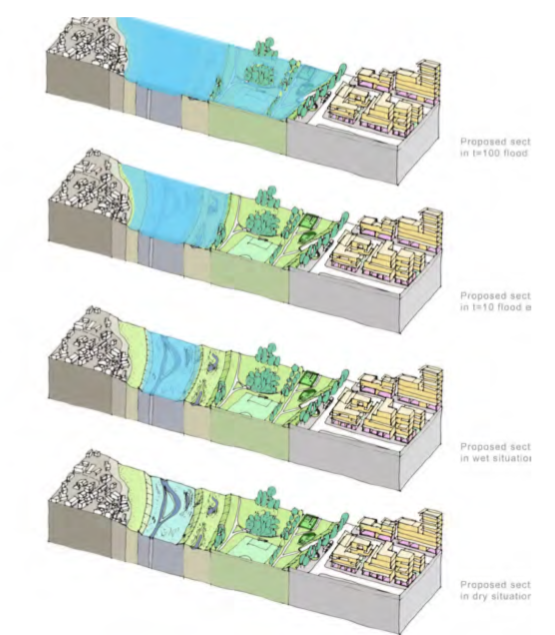 The Tanzania Urban Resilience Program, also known as TURP, is a partnership between the Government of Tanzania, the World Bank Group and the UK Department for International Development (DFID). It is funded by DFID and aims to support the national and local government of Tanzania to manage urban climate risk. It was launched on 31 May 2017. TURBP supports the flood risk management efforts in the Msimbazi Basin.


‘A key objective of TURP is to support the introduction of modern methods for quantifying disaster risk, and the spectrum of potential impacts in order to build greater resilience into the urbanization process’.


The TURP has four pillars to work with:


Dar es Salaam’s Multi-Agency Emergency Response Team (DarMAERT) with the support of the World Bank, have prepared a training, exercising and drills programs. The Emergency Operations Center and standard operating procedures have been reviewed and developed further.


The Rapid Transit Agency (DART) and Tanzania National Roads Agency (Tanroads), with the support of TURP, have been looking into contingency and emergency plans and developing a road map for short and long term emergency management to prepare for and reduce the impacts of disasters including flooding.


In October 2017, the DarMAERT Emergency Response Plan was launched. The plan provides a framework for emergency responders. It ensures that they know their role, are competent, work cooperatively with organisations and stakeholders and have access to resources and facilities required to respond to incidents.


A toolkit to support the creation of Community Disaster Response Plans at sub-ward level, is in the process of being prepared. The aim of these plan is to increase the community’s resilience by providing them with procedures on how to respond to flood events.


You can find links to the Tanzania Urban Resilience Program reports in the reference section.

The Ramani Huria (Open Mapping) project, is TURP’s community engagement and mapping project. It is based on community risk identification, data collection and socio-economic exposure mapping.


Community mappers, including university students and community members, have been trained to identify community infrastructure and flood hazards and create sophisticated and accurate maps of Dar es Salaam.


Ramani Huria uses OpenStreetMap (HOT) which is an alternative and low cost method. They collect data on local infrastructure, drainage and household data.


So far 20 wards at risk have been mapped at high resolution. Buildings, transport, drains, businesses and community assets have been mapped. They also collect input from communities at risk regarding flood inundation and flood impacts.


Meetings have been conducted by the team with different actors in the community to discuss assets at risk and possible threats perceived by the community at sub-ward level. The team have also started creating community risk maps.


Some of the achievements of the Ramani Huria Project:

The data collected intended to support inundation modelling, exposure mapping, and land use planning.
The project is currently ongoing. You can find out more about them on their website.

The video below provides information on the project.

Fact of the Month

Promote your Page too